DISCLOSURE: I may link to relevant products, companies or helpful info which may be affiliate links, meaning I may earn a small commission. As an Amazon Associate & other affiliates, I earn from qualifying purchases at no extra charge to you. The views & opinions are my own. Please see the disclaimer and privacy policy. After spending a couple of days discovering Trinidad’s gorgeous Caribbean beaches and breath-taking waterfalls, You should discover the south Trinidad island, including the Temple in the Sea.

Whereas the north of Trinidad island is dominated by the capital Port of Spain and is densely populated, the south Trinidad area is more rural and nature is abundant. The south also boasts a larger number of Hindu temples and sights.

Why Visit the Waterloo Temple in the Sea?

One of the most popular and most extraordinary Hindu temples of Trinidad and Tobago is the Temple in Sea. Discover here the captivating background story and how to visit this emblematic sight of Trinidad island and its Hindu culture. It is one of the major places of interest in Trinidad.

Almost 1/3 of Trinidad’s population has an Indian background. This gives the two-island state an amazing cultural richness. It is one of the reasons why Trinidad seems so exotic in comparison with other Caribbean states.

The Indian influences mixed with the rich African and European heritage make you feel Trinidad’s vibrancy on any street corner: Music, food, clothes, architecture… All of them are a symbol of a fascinating cultural melting pot in Trinidad.

When it comes to religion, everybody can practice their religion freely. When on Trinidad’s roads, don’t be surprised to find a Presbyterian church in front of a Hindu temple. Although there are really a good many Hindu temples!

Hindu temples are quite prevalent in Trinidad and we were honored to be able to participate in a Hindu wedding in Trinidad. We appreciated all the beauty of the temple as well as the rich culture during the Hindu wedding ceremony.

For more Beautiful Hindu temples around the world, see this fun collaborative post What makes the Temple in the Sea special?

There is a beautiful Hindu temple in Trinidad with the mystical name “Temple in the Sea”. It is located about a 1 1/2 hour drive from Port of Spain in Waterloo, Carapichaima, and is one of the major sights of Hinduism in Trinidad.

Indeed, the temple is surrounded by a unique mysterious atmosphere. Set in the sea, exotic birds circumvent the temple and broken Hindu murtis are everywhere.

If you have never been to India, the “Temple in the Sea” will be an eye-opening experience: the flags and Hindu statues adorning the temple, the murtis of Lord Shiva with flowers around their necks… -all of these resembles the temples of India.

The Temple in the Sea is surrounded by beautiful, colorful flags. Each flag’s color has meaning and significance, and there are Hindu deities inside the temple.

Despite its small size, the Temple in the Sea is a symbol of great persistence and love.

The Background Story of Temple in the Sea

The story behind the construction of the Temple in the Sea is even more fascinating and emotional than the setting itself.

Indeed, the Temple in the Sea was built by one single man with his bicycle, a few buckets, and the material that he could find in his immediate surroundings. Engineers have no idea how he did it.

The temple was first built by an Indian sugar-worker called Sewdass Sadhu. He would save and spend all his meager wages to travel back to India to worship at the holy shrines. As the years passed, the prices to travel from Trinidad to India rose a lot. Too much for a laborer who was only earning a small monthly wage.

Consequently, Sadhu decided to create a place of worship in Trinidad where already thousands of Indians were living at that time.

He created a beautiful temple that quickly became a place of worship for Hindus in Trinidad. Five years later his temple was destroyed by the State, owner of Caroni-land, and Sadhu was fined and went to jail.

As soon as he got out of jail, Sadhu started building a new temple. This time he would build his temple in the sea which was not owned by the state. He dedicated himself during the 25 coming years to build a new place of worship for the Trinidadian Hindus.

With nothing more than his hands, his bicycle, a leather bag, and some steel drums, Sadhu created an artificial island by offshoring, toiling, and unloading barrels of dirt into the Gulf. All the stones were carried in his leather bag. The sea erosion prevented him from completing his work before his death.

In 1994, the government at that time helped to finish Sadhu’s beloved temple. Nowadays the “Temple in the Sea” is a complete prayer complex with a kitchen, a restroom, a dining room, and a veranda running around the building.

The story behind the temple and its amazing setting, especially during sunset, make the “Temple in the Sea” an absolute must-do when in Trinidad. 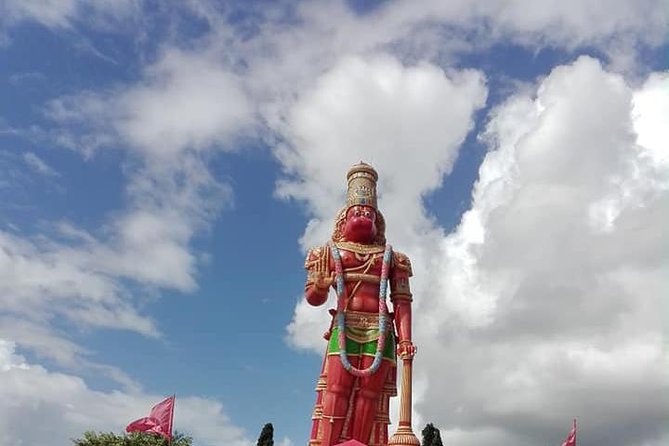 Port of Spain & East Indian Heritage Tour
Following the city tour, you will be taken on a Mini Central Tour where you will explore the sights, sounds and flavours of central Trinidad. Here, you will visit the Chaguanas Market and Bazaar Street where you can purchase and taste some of our fresh, local fruits! After you have filled up on frui…

Where to stay in Trinidad

Use my handy list to find the best place to stay in Trinidad:

After you visit the Temple in the Sea, be sure to explore the rest of Trinidad and Tobago. Bookmark & visit my other page with a big long list of fun activities and things to do in Trinidad and Tobago. The list is long & you won’t have time in your itinerary for everything, but there will definitely be something to do on every day of your vacation!